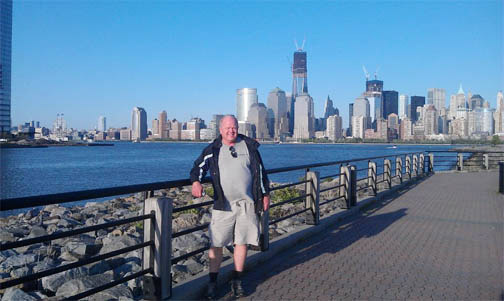 The speed limit drops in 10 mph increments with very little distance between the speed limit signs. Hwy 54 will knock two hours off the drive time between Albuquerque and Wichita, and it provides a great two-lane road snapshot of America off the national interstate system. The picture is of long stretches of open two-lane road but there are other pictures, taken with radar, that provide a hazardous view for drivers on a schedule and are no doubt a source of revenue for the little towns along Hwy 54.

The highway goes through several tiny towns, not around them, and if you take their word for it, they just want people to slow down, first to 55 mph, next to 45 mph, after that to 35 mph, then to 25 mph. And just in case you were not paying attention, in some towns they throw in a last minute 20 mph sign. There is no coasting between the speed limit signs to reduce your speed. Each speed limit reduction requires application of the breaks.

Some kind people have taken to offering a warning but even with advanced notice it actually takes concentration and a good bit of work to keep the speed at exactly first to 55 mph, next 45 mph, after that 35 mph, then 25 mph and be on the lookout for that last 20 mph.

America isn’t just small towns and speed traps but the stereotype is certainly a part of America, especially on Hwy 54. With my highly honed over-the-road skills, I’ve traveled across Hwy 54 across the Oklahoma panhandle a few times and never been trapped. I’d guess also that my attention for detail honed over 25 years of submitting architectural plans to city building departments for plan check gives me an unfair advantage. Plan check is not an easy road to navigate.

I’ve made it through Hwy 54 without delay. I’ll now find time for another ride on the ferry across the New York Harbor. The picture above was from a few weeks ago. This time I may take in the Statue of Liberty. The Hoboken ferry terminal is just a short walk from where I’ll be parked. It’s a nice walk after a beautiful ride across America. Next stop Hoboken, New Jersey.