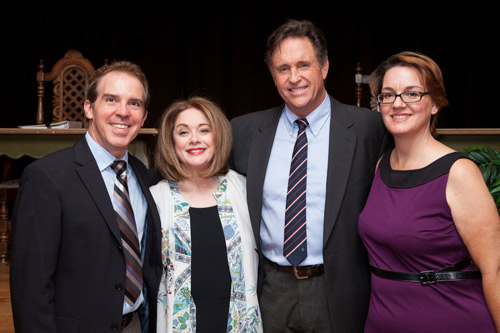 The audience of some sixty patrons of the arts, and theatre supporters of Dezart Performs, were treated to a wonderful stage reading of A.R. Gurney’s classic performance piece “Love Letters”.  Hollywood stars Donna Pescow and Robert Hayes, delivered tender, poignant, and sensitive performances as Melissa Gardner and Andy Ladd.

Playfully directed by Lenny Ripps, Gurney’s two-character play is an oft-told tale about lifetime friends who drop into one another’s lives, from time to time, via letters to each other. Although, it’s set in an earlier and somewhat gentler time in America – the 1930’and ‘40s – Gurney’s dialogue and insight into the world of privileged, preppy New England society, still resonates, even with today’s 47 percenters and those old enough to remember those days.  Core American values and emotions, transcend time and class.

Donna Pescow, of the TV series “Angie” and the iconic movie “Saturday Night Fever”, brought an appealing and sympathetic quality to her performance as Melissa.  Pescow transcended the “poor misunderstood little rich girl” label and made her performance a finely nuanced little gem.

Robert Hays, of “Airplane” fame (who kept setting up the Leslie Neilsen lines “…and don’t call me Shirley”), has lost none of his boyish, wide-eyed charm as Andy.  He grew steadily in his Andy persona, ultimately delivering a full bodied and confident friend and lover to his life long friend Melissa.  The onstage chemistry between Pescow and Hays was genuine and real.  They’ve performed together in the TV series “Angie” several years back and continue to bump into one another on various guest-starring roles on TV.

Following the evening’s “Love Letters” performance, guests were treated to a champagne and dessert get together with the evening’s two stars.

Also, it should be noted that the absolutely “decadent desserts” catered by Trio Restaurant of Palm Springs did indeed, have zero calories in them (yeah, sure, but boy, were they scrumptious!).

Up next, the Dezart Performs group presents, the winners of the 4th Annual Play Reading Series: “Feeding Time at the Human House”, “The Blind Date”, and “Mourning Glory” in fully mounted stage performances, beginning Thursday, November 29 through December 9 at the Palm Springs Woman’s Club.  For reservations and ticket information call 760-322-0179.