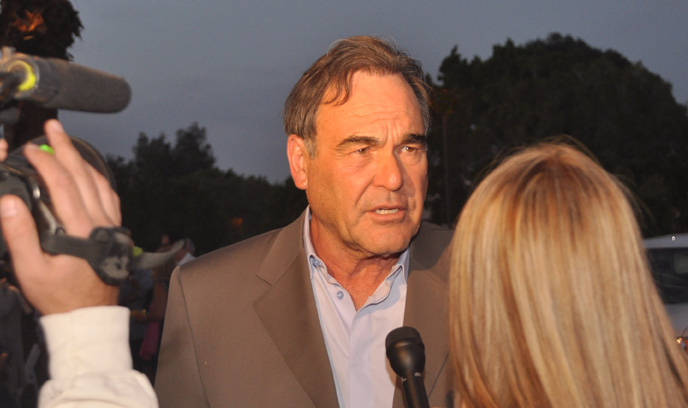 There is a definite correlation between film festivals and Palm Springs. Like bees to honey, high-powered stars, directors, writers, plus Hollywood Industry high rollers, with the knowledge of successful track records of other festivals held here – namely the Palm Springs International Film Festival – make Palm Springs the number one festival destination to launch a film, or in the present case, a first-ever American Documentary Film Festival.  The festival runs from March 29th to April 5th, with all twenty-nine screenings taking place at the Camelot Theatres (of course, our famous Palm Springs weather doesn’t hurt either).

Ted Grouya, the executive director of the Festival, is a multi-talented professional writer/director/producer/cinematographer.  In addition to his successful movie industry career, he is a savvy filmmaker with a vision that includes recognizing and honoring the importance of the film genre known as “the documentary”.

It should come as no surprise to learn that Grouya chose acclaimed three-time Hollywood Academy Award winner Oliver Stone (an honored documentary filmmaker in his own right) to be the recipient of the inaugural “Filmmaker Who Makes a Difference Award” from the American Documentary Film Festival. Stone is certainly in the forefront, if not the leader, of projects and films that have raised our awareness of controversial subjects over the years, that otherwise would not be on the country’s “radar screens”.

At the Friday, March 29th opening night ceremonies and Gala held at the Camelot Theatres, Stone attended with his son Sean (also a filmmaker), and his ninety-one year old mother Jacqueline.   The film selected by Grouya to kick-off of the festival is “Commandante”, the documentary-styled film Oliver Stone made with Fidel Castro as its sole subject.  It was never intended, according to Stone, to present Castro, a lightening rod of controversy with many Cuban-Americans living in south Florida, in any particular light.  Stone has always maintained his film is not journalistically driven, but merely a filmed portrait of the Cuban dictator.

The movie is a fascinating look into the public and private man that is Fidel Castro.  Critics of Stone’s documentary have claimed that his filmed coverage of Castro in the movie, casts the dictator in a favorable light, becoming sort of a propaganda vehicle for Cuba.  Stone, in the role of a documentary filmmaker, takes existing historical footage and archived news-reel footage, and blends them together with modern day footage he shot in Cuba over a three day period in 2003, producing an interesting portrait of one of history’s famous dictators in the process.  The new footage, shot by Stone and his crew, produced over thirty hours of film that eventually was edited down by Stone to a manageable 99 minute running time.

In the Q & A session following the movie, Grouya and Stone took questions from the audience.  Most questioners were interested in learning about what sort of person Castro was when the cameras weren’t running.  Stone obliged with anecdotes about his three day shoot with Castro; informing the audience about Castro’s ground rules concerning the subjects to be discussed and when to stop filming.  The bottom-line answer was that there weren’t any rules from Castro or anyone else.  It was a free wheeling cinematic experience from beginning to end.  Castro, who doesn’t speak English, has to rely on his translator of thirty years to respond to questions from Stone.  Their exchanges were friendly, light in tone, and frank and illuminating, as far as anyone can tell.

“Comandante” was Stone’s first film about Castro.  He has two additional documentaries in this festival; one more with Fidel Castro as a subject entitled  “Looking For Castro”, made in 2004, and “South of the Border” made in 2009 where he interviews seven South American elected presidents and examines what has been taking place in highly volatile and politically sensitive South America.

The American Documentary Film Festival is loaded with quality doco’s, which range from compelling social issues to Hollywood personalities like Dolly Parton to sporting competitions for aging seniors, and much more.  If you like documentaries, then this is the festival for you.

The Festival runs through April 5th.  For ticket information call the Camelot Theatres at 760-325-6565.