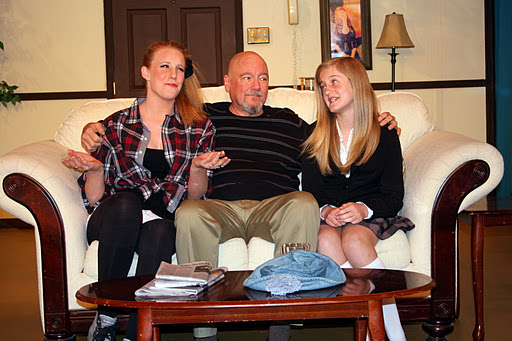 When the curtain went up for the opening night of the Neil Simon comedy, “Jake‚s Women” at Theatre 29 in Twentynine Palms, Director Butch Pelfrey knew he had a hit on his hands. “The cast is highly motivated and have strived to develop the characters as they feel Neil Simon would want.” he said.

The play tells the story of Jake, a novelist who is more successful with fiction than with real life, facing a marital crisis by daydreaming about the women in his life. The wildly comic and sometimes moving flashbacks played in his mind are interrupted by visitations from actual females. Jake’s women include a revered first wife who was killed years earlier in an accident, his daughter who is recalled as a child but is now a young woman, his boisterous and bossy sister, an opinionated analyst, his current wife, who is leaving Jake for another man, and a prospective third wife.

Pelfrey, directing his seventh show for the highly successful community theater speaks very highly of his performers. “K.W. Heckart, as Jake, is doing a fantastic representation of a man slowly losing his wife and his mind. he said. He describes Jake’s sister Karen, Wendy Costello, as „both a comfort and an irritant to Jake, She‚s there when he needs her and when he wishes to be left alone.‰ Pelfrey said Janet Peercy, as Jake’s current wife Maggie, is “absolutely riveting in her ability to ride the emotional roller coaster that is her marriage and Cheryl Gillon, as Sheila, Jake’s current “another woman”, provides the funniest situation of the play.”

The veteran Director, recently retired after a long career with the Marine Corps, both as a Marine and instructor, had equally high praise for some of the newcomers and younger members of his cast, saying, „Rebekah Douglas is superb as Julie, Jake’s deceased wife whom he has never fully released from his heart even ten years after her death. Jeanne Rodick, as Jake’s shrink, Edith, is a refreshing new face on the Theatre 29 stage. Kara Dailey, as Jake’s daughter Molly at 21, is also a new comer to Theatre 29, she is a breath of fresh air able to cover the complete range of emotions necessary and Kayleigh Coughlin as Molly at age 12 is wonderfully emotional and insightful.‰

Season tickets to Theatre 29 are still available, $68; $56 for seniors and military; and $46 for children and students.

Theatre 29 is located at 73637 Sullivan Road, (right around the corner from Barr Lumber) in the City of Twentynine Palms.