Desert Local News Desert Local News is your local news, entertainment, theater, film, and online fashion magazine. We provide you with the latest breaking news straight from the entertainment industry.
Home Community Southern California Los Angeles police beat a boy for skateboarding on the wrong side of the street (VIDEO) 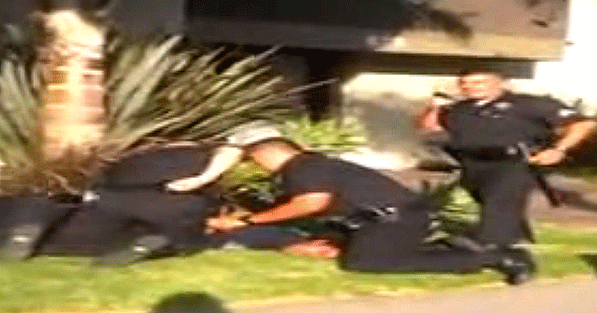 A young man was brutally pinned down and beaten by Los Angeles police for skateboarding on the wrong side of the road, leaving him with a broken nose, a broken cheekbone and a concussion.

Ronald Weekley Jr., 20, had blood coming out of his mouth after four police officers punched him repeatedly in his face, even while he was pinned down with his arms behind his back.

The young man had been cited with resisting arrest after driving his skateboard on the wrong side of the street in front of his house. A friend of the man said Weekley was trying to avoid gangsters on the other side of the street when police asked him to stop.

Police then proceeded to tackle him.

“I turned around to two cops running directly at me and throwing me on the ground, putting my arms behind my back and tying my legs to my arms and telling me I was resisting arrest,” Weekley told KTLA-TV.

As neighbors watched the man get beaten on his front lawn, a local resident took a cell phone video of the disheartening moment.

Weekley recalls feeling helpless with four officers on top of him. While they were striking him in the face, all he could do was scream.

“Just to hear him scream on video, for them to beat him the way they did… The world is corrupt to me,” the mother told KTLA-TV, with tears in her eyes.

“I was like screaming because I thought they were going to kill him,” a witness told the television station.