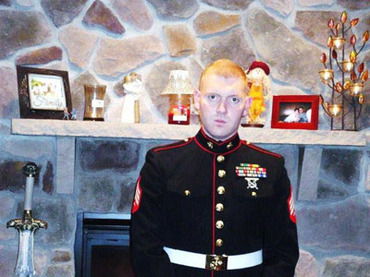 Nearly two weeks after he was hauled off by authorities and admitted to a psych ward over his own Facebook postings, retired Marine Brandon Raub is speaking out about his detainment and what Americans should know about their right to free speech.

Raub, a 26-year-old decorated military vet that served two tours overseas, was visited by agents with the US Secret Service, the FBI and local law enforcement on August 16 after statements he made on his personal Facebook page raised the eyebrows of authorities. Posts calling for a political revolution and even lyrical excerpts from rap songs placed his social networking profile on the government’s radar, and after briefly questioning him at his house two weeks ago, Raub was handcuffed and hauled off.

One week later he was released from custody, but Raub and his attorney say that not only was no crime committed, but that the Marine still has yet to be charged with a crime.

“The idea that a man can be snatched out of his property without being read his rights, I think should be very alarming to all Americans,” Raub says in an interview this week conducted by his attorney, the Rutherford Institute’s John Whitehead (YouTube link).

Raub claims that he handled the entire incident pretty well, even though authorities never read him his rights or charged him with a crime; instead he was detained under a civil commitment statute that his attorney says whisks away hundreds of thousands of Americans every year in episodes just like this one that rarely go recognized in the media.

A Catholic Hospital in Iowa Offered Contraception for Decades. Then the Bishop Found Out.