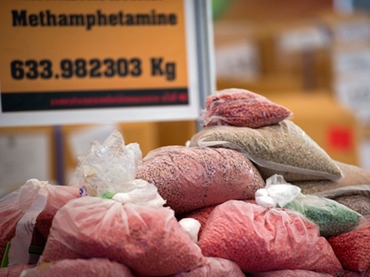 Methamphetamine lab seizures are on the rise in US cities and suburbs as makers of the lethal drug have been moving their now-portable labs into more populated areas and increasing production.

Methamphetamines used to be produced most frequently in rural areas, where abandoned buildings and farmhouses offered an ideal location for a hidden lab. With fewer authorities to combat the problem and wide open spaces that makes it difficult to find rural meth labs, the drug makers more often chose to operate production from the countryside. Anhydrous ammonia, a key ingredient in producing meth, can also be found more frequently in rural areas, since farmers use the chemical as fertilizer.

But a rise in portable labs has made it easier for meth makers to move to US cities and suburbs, especially since the portable labs lack the odor that once forced the drug makers to the countryside. The deadly drug can now be made in someone’s car using a bottle of soda. This ‘shake-and-bake’ method produces the drug in smaller quantities, but doesn’t make production any less dangerous: the chemical reaction can still cause a large explosion, even if it is produced in container as small as an empty water bottle.

With easily accessible recipes on the Internet and cheap ingredients available in many US stores, more people have begun to produce their own meth. Cold pills, battery acid and drain cleaner are some of the substances required to produce the lethal drug.