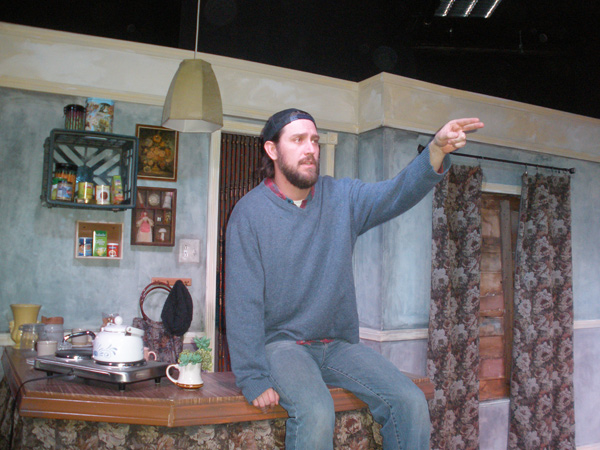 In the world of theatre, a new live-theatre venue opening is always a cause for celebration.  The occasion signals the world’s oldest spoken art form – The Theatre – has added another mirror of society for exploration and examination by playwrights, actors, directors, and creative individuals, right here in the Coachella Valley.

“Coachella Valley Repertory Theatre”, after a three-year gestation period, opened its doors to patrons on Wednesday, January 25th in its beautiful, new 88-seat home, located in The Atrium, in Rancho Mirage.   Prior to the performance, Founder and Artistic Director Ron Celona beamed with pride and appreciation by publicly acknowledging and thanking those key Valley sponsors and individuals who made the entire venture possible beginning in 2009.

The story takes place in Philadelphia in the late 1980’s and centers on two neurotic people searching for love.

Rose (Courtney DeCosky) is a nervous and skittish woman who works in a Five and Dime store, is haunted by past events and is obsessed with meeting the man of her fantasies.  She dreams of true-love and how she will meet a man one day who is perfect for her.  One who doesn’t smoke, drink, curse or make fun of her. Rose yearns for a guy with a smile; one she can hang onto, “a guy I can speak to without words”.

Instead of Mr. Right, she meets Cliff (Chip Bent), a potty-mouth, fast-talking, wise-cracking, blue collar cross-country truck driver whose rig has broken down in South Philly.  While waiting for his truck to be repaired, Cliff wanders into Rose’s store looking for a one-night stand.  “The Woolgatherer”, is a two-person character study and a great opportunity for these two wonderfully talented actors who bring to life, warts and all, the story of two very complicated and oddball characters through comedy and pathos.

The beauty and the joy of this production, which is seamlessly and creatively directed by Celona (the company’s Artistic Director), are the performances of DeCosky and Bent.

Their on-stage chemistry perfectly compliments the characters that playwright Mastrosimone must have envisioned and more.

Director Celona and his Board of Directors have launched and introduced a quality, professional theatre company to audiences of the Coachella Valley with this auspicious production of “The Woolgatherer”.  The play performs on Wednesday, Thursday, Friday, and Saturday at 8 pm February 1 through February 4.  Sunday, February 5th matinee is at 2 pm.  Call the box office for reservations and ticket information at 760-296-2966.

As a side bar note CV Rep has announced that stage, screen, television, and film star Jo Anne Worley will be the special guest artist at their upcoming February Luminary Luncheon.  This special luncheon, which is open to the public, is part of CV Rep’s series of Luminary Luncheons and will be held on Wednesday, February 22, 2012.  The luncheon, sponsored by Acqua Pazza/Lulu California Bistros, begins at noon, followed by an interview and a Q & A session with Ms. Worley.  Tickets are $35.00, and reservations are required.  Call 760-296- or go online at www.cvrep.org.