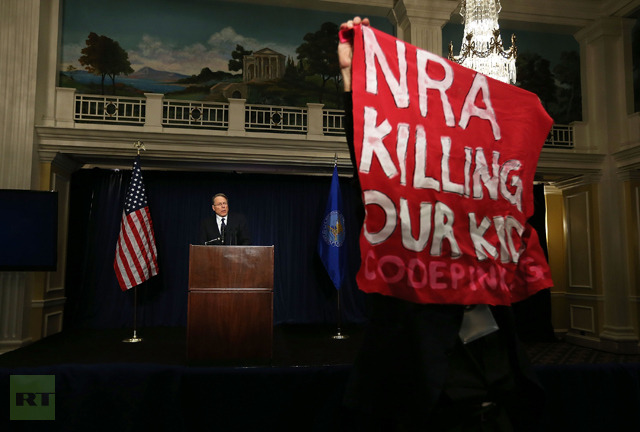 One week exactly after a horrific shooting at Newtown’s Sandy Hook Elementary claimed the lives of 20 children and half-dozen adults, the National Rifle Association (NRA) is imploring for guns in every school across America.

“I call on Congress today to act immediately to appropriate whatever is necessary to put armed police officers in every school — and to do it now, to make sure that blanket of safety is in place when our children return to school in January,” NRA Vice President Wayne LaPierre said early Friday.

LaPierre addressed a room full of reporters in the nation’s capital seven days from the date after 20-year-old Adam Lanza opened fire in a rural Connecticut elementary school, killing 26 people while also rekindling a national debate on gun control.

The NRA refrained from making any comments regarding the shooting in the week since, but on Friday LaPierre pleaded for the public to heed his group’s call for more guns — specifically guns in classrooms from coast-to-coast.

The NRA has “remained respectfully silent” in the aftermath of the tragedy, LaPierre said, but has now decided the time has come to take action.

According to the gun rights advocate, the most logical way to curb the chances of another bloody massacre is to install armed gunmen in every school in the country.