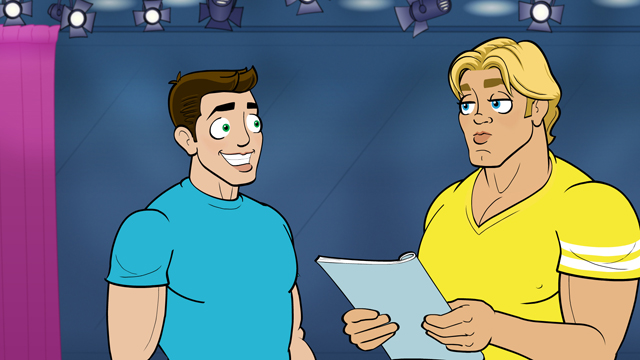 September 17, 2012,  Palm Springs, CA – LGBT Short Films, 38 of them to be exact, are more than just the opening act for the feature films at the fifth anniversary edition of Cinema Diverse: The Palm Springs Gay and Lesbian Film Festival, which opens on Thursday, September 20th and runs through Sunday, September 23rd. “The short films we’ve selected run the gambit,” said Michael C. Green, Managing Director of The Palm Springs Cultural Center. “They are as short as 2 minutes and as long as 37 minutes. Many of them are paired with feature length films, but we also have four screening times that are devoted exclusively to groups of loosely themed short films.”

Short films, which sometimes struggle to find a broad audience commercially, are considered by many industry insiders to be succinct, yet pure forms of artistic expression for filmmakers. They are also very often the first films for young filmmakers working on graduate programs or hoping to get noticed for their work.

“We received far more short film entries this year than feature films,” Green said. “Some of our selections, like FAGS AFTER DARK and THE BURIED, are powerful – even brutal in their portrayal of gay bashing and gay panic violence. Others, like SISTERHOOD OF THE SASH: INTERNATIONAL MS LEATHER AT 25, POWERFUL OUT WOMEN, AMERICA’S MOST UNWANTED and ENTRY DENIED, are great narrow-focus documentaries. And then there are some that are more light-hearted – HALF-SHARE, a story about Summer on Fire Island (starring Alec Mapa), THE ALTERED LIVES OF LAVONNE SALLEE (the story of an altered Barbie artist) and TROY: NAKED BOYS BEHIND BARS, SING! – an animated satire of gaysploitation entertainment. There’s really something for everyone, and a little bit of everything in our line-up of shorts.”

Green is particularly excited about a program that was proposed to him by his friend, Comedian Shann Carr. “Shann was telling me about all these new lesbian web series that have been popping up on the internet. She wanted to find a way to share them with local women, so she and two of her favorite local editors created a Montage-Mash-Up featuring a bunch of the best lesbian web series making waves on the net.” “It’s just a sneak peek,” Carr said. “But it’s enough to give film festival audiences an idea of not only what’s out there, but also how the newest indie producers are reaching audiences outside of theaters.” The Montage-Mash-Up will screen as part of the “Chick Flicks Screening on Saturday, September 22nd at 11:30am.
For more information, and to see the complete schedule,

TICKET INFORMATION:
NOTE: All CINEMA DIVERSE screenings will be held at Camelot Theatres