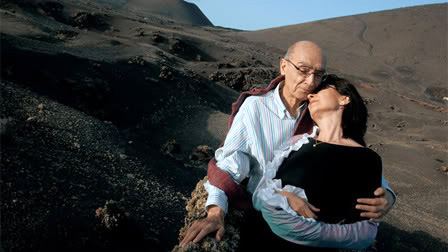 Without sounding too condescending or putting down the average citizen, I think it’s fair to say that we Americans don’t keep close tabs on the ups and downs of the world’s Nobel laureates.  Granted, we have had great success in the sciences and other fields but can only list seven Americans to have received Literature’s greatest prize – a Nobel.

In 1998 Jose Saramago, playwright and novelist, became the first Portuguese citizen ever to receive the Nobel Prize. His award was in the field of Literature.  This great honor went to a man who had a fourth grade education, and didn’t begin writing until he was sixty years old! His journey is the stuff of legends – producing more than 30 novels and plays in the process.

In the documentary movie “Jose And Pilar” by Brazilian filmmaker Miguel Goncalves Mendes, the love story of Jose and his fiery Spanish wife, Pilar Del Rio, is wonderfully captured and chronicled over a two-year period.  Mendes, with complete access to the larger-than-life famous couple, makes the most of each and every moment in their incredible life story.  He lovingly and honestly presents his subjects for the camera to examine and explore, to see every nuance in their day-to-day existence; warts and all.  He doesn’t spare Jose when it comes to recording candid comments concerning Jose’s atheism and/or his Communist background, or in his disappointment when the President of Portugal officially requested some his writings be removed from the libraries of Portugal, after the publication in 1993 of his book “The Gospel According to Jesus Christ”.  Jose’s response to Portugal’s public humiliation was simply to move to the Canary Islands, a Spanish possession, and continue to write.

Although it is a documentary, at times the film “reels off” as if the audience is watching a feature film.  That’s to the credit of the 83 year-old Jose and his much younger wife Pilar.  They are a perfect pair of lovebirds; constantly touching, holding hands, and reassuring one another.  It’s Pilar, Jose’s gatekeeper, who handles all of the administrative duties, and the decisions concerning Jose’s appointments, interviews, travel schedules, radio and TV interviews and book signings.   It’s an exhausting and a highly detailed job but it is just what Jose needs in order for him to continue creating and writing.  Director Mendes presents visually what Saramago internalizes in voice-over portions as he expresses his philosophy of life via his many books, plays, and novels.

I had an opportunity to chat with Pilar Del Rio Saramago following the screening of the Mendes film at The Palm Springs International Film Festival (PSIFF).  She is a highly intelligent, very personable, vivacious and easily accessible person.  She is a former well- known journalist in Europe (that is how she first met Jose.  As an admirer, as well as a journalist, she requested an interview. They met, and as they say, ‘the rest is history’).

Her ideas on the role of women in world politics, was one subject we briefly discussed.  She is a huge fan of Hillary Clinton.  With Pilar being a non-English speaker, we pressed Director Mendes into being our translator (I have zero language skills in Portuguese).  We agreed that if more women were in positions of power, there would be less violence and fewer wars raging around the world.  She says, “…the women of the world are tired of continually cleaning up the messes made by men”.  She has a lot company in voicing that opinion.

Just as a mother lion defends her cubs, Pilar fiercely protects the legacy of her famous husband (Jose Saramago died in June 2010, at the age of 87).  As the oldest of 14 children she is a natural born leader and negotiator which writer/director Mendes fully displays in his provocative, incisive, informative, and entertaining documentary film.

There are a lot of philosophical points of view and information one can glean from viewing “Jose And Pilar”, which in my opinion, is a bona fide Oscar contender.   Make sure you catch this outstanding and engrossing film when it screens at a multiplex near you.