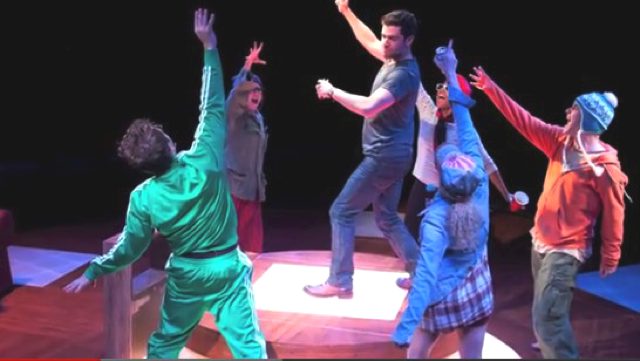 If ever a TV genre needed to be spoofed it’s the mindless and vapid “reality show”.  The death of scripted TV dramas or comedies can be directly traced back to the last Writer’s strike.  Without the writer’s words, the producers were forced to resort to filming outlines of show ideas with the reality contestants sometimes supplying the ad-libbed dialogue and improvised situations.  It wasn’t a pretty picture then, and now that the format has grown into a staple of the industry, it’s still not a pretty picture.  It’s just more of the same mindless and vapid (but less costly to produce) genre, ad nauseam.

The world premiere of the Old Globe’s new romantic comedy musical “Nobody Loves You”, now onstage at the Sheryl and Harvey White Arena Stage, is a welcome and necessary antidote to television’s plethora of reality shows.  The story very cleverly takes on the shallowness of reality shows; stripping them bare in music and song that leaves the audience in stitches pleading for more.  With nineteen songs, some of them blisteringly funny and on-the-nose, the production (with music and lyrics by Gaby Alter and libretto and lyrics by Itamar Moses), comes sparklingly alive under the direction of Michelle Tattenbaum.  What a creative trio!  Of course it helps, and becomes much easier to entertain an audience, when one has eight very talented actor/singer/dancers to throw into the mix.

The story and the music take the audience on a hilarious, behind-the-scenes ride through reality television and into real life.  When Jeff (Adam Kantor) a philosophy grad student, joins a dating show to win back Tonya (Nicole Lewis) his ex, he breaks all the rules and tries to blow the game wide open… until he meets Jenny (Jenni Barber).  In a world where every kiss is staged for the cameras the musical asks the question: Can two people find a real connection toward enduring love?  The answer to that vexing interrogative is the stuff and substance of “Nobody Loves You”… and they get the job done – without an intermission – in about 90 hilarious minutes.

The high-energy cast members, all of whom have impeccable comedy timing, make the fun-filled ride totally entertaining. Leading the way in this faux TV show romp is Heath Calvert, playing to the hilt the handsome, shallow, and very self-obsessed Byron, the show’s M.C.  The ditzy, but sexy, Lauren Molina shines as Megan.  Her “Come On In” (into a hot tub, that is) number is deliciously seductive, and just wears down Kelsey Kurz as Chris and his resolve to keep their relationship at a respectful, acceptable distance for a conflicted Christian young man (the poor fellow never had a chance).

Adam Kantor as Jeff and the fetching Jenni Barber as Jenny, ostensibly the two romantic leads, are kindred spirits who connect on the TV show.  He’s a grounded philosophy doctoral candidate, who becomes a contestant with a penchant for breaking the rules to make a point.  And she’s a story editor on the TV show, but a person who really wants to make movies.  It’s only a matter of time before they “really” discover one another, and who they want to be, and move up to the next level.

Alex Brightman, plays a trio of characters, but seems to hit the right note as the stoner roommate of Jeff, although his number as Evan “The Twitter Song” scored big with the opening night audience.  Kate Chadwick Morgan, in two roles, and Nicole Lewis in three, supply solid support in this very clever and timely musical spoofing of the reality show genre.  Today’s entertainment news out of Hollywood, however, confirms that more reality TV shows are on the radar screens of television producers (ugh, and I’m a member of the Academy too).