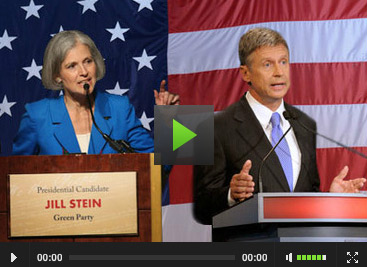 Libertarian Party candidate Gov. Gary Johnson and the Green Party’s Jill Stein will sound off once more before Election Day, with both presidential hopefuls now slated to debate live from RT’s Washington, DC studio on November 5.

Tens of thousands around the globe watched earlier this week when broadcasting legend Larry King moderated a debate between the top third-party candidates live from Chicago. As those politicians continue to be shunned by the mainstream media and political establishment alike, though, they remain excluded from presenting their platform to the country on the eve of a historic election. RT aims to make a difference, however, and will host Johnson and Stein to speak their minds on the topics Americans really care about in 2012.

Following the success of this week’s Third Party Presidential Debate broadcast on RT live from Chicago, the top candidates as selected by voters on the Free and Equal Elections Foundation website will move on to a second debate from the nation’s capital, this time answering questions dedicated solely to foreign policy.

“The voters have spoken, and we are pleased to announce that Gary Johnson and Jill Stein will advance to the second debate,” Christina Tobin, founder and chair of Free and Equal, tells RT.

When Johnson and Stein took the stage to participate in the first third-party debate this year, the candidates sounded off on questions that, while vital to the voting public, were absent from the discussions held between President Barack Obama and challenger Mitt Romney during the televised debates that selected only Democrat and Republican politicians to participate.

The debate, which was originally set for October 30, was postponed as a result of Hurricane Sandy.