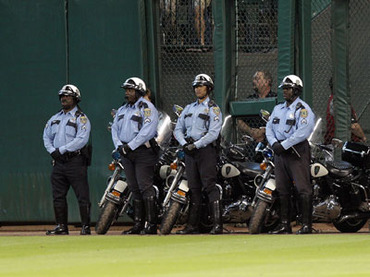 Two Texan women have filed a lawsuit for being subjected to embarrassing ‘roadside body cavity searches’ by state troopers who searched their genital regions.

The women were stopped by a trooper for throwing a cigarette butt out of their car window, which is prohibited under the Texas Health & Safety Code that outlaws littering. Angel Dobbs, 38, and her niece Ashley Dobbs, 24, were stopped by a trooper on State Highway 161 and forced to exit their vehicles. Trooper David Farrell then began to question the women about marijuana, proceeding to search the car and then calling his female colleague Kelley Helleson to the scene to search the women’s bodies.

The trooper’s dash-mounted camera captured the incident on tape, which was published online by the Dallas Morning News. The video shows Helleson using her fingers to search the anuses and vaginas of the women. The trooper used the same latex glove to touch the genitals of both women, while conducting the search on the side of the road in full view of the passing vehicles.

One of the women was suffering from a cyst, which Helleson touched with her fingers, causing “severe and continuing pain and discomfort”.

“Angel Dobbs was overwhelmed with emotion and a feeling of helplessness and reacted stating that Helleson had just violated her in a most horrific manner,” the lawsuit states.