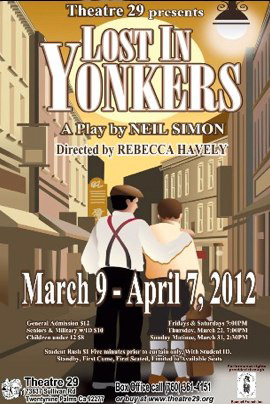 Neil Simon is America’s greatest comedy playwright hands down.  No one comes even close to equaling his fabled track record of having written more than thirty smash hit comedies that have appeared on Broadway.  He is the only playwright to have three smash hit plays running simultaneously on Broadway; a record that still stands today.  He is truly the King of comedy writers.

But he has been known to write darker stuff, plays with a little edge like “ The Gingerbread Lady” in 1970 with characters seriously talking about suicide, and his 1991 comedy/drama “Lost in Yonkers”, the current production on the boards at Theatre 29, up in the hi-desert community of Twentynine Palms.

Desert Theatre League (DTL) award winning director Rebecca Havely’s production is a visual treat for the eyes with two set locations on the stage.  One location is the interior of Grandma Kurnitz’ home, where most of the scenes and the main action of the play takes place, and the other location is the candy store (in most productions of “Yonkers” the candy store is not seen but merely referred to in dialogue).

The main thrust of the coming of age story focuses on the character of 15-year old Jay Kurnitz (likeably played by Jarod Burks).  Jay and his younger brother Arty (played by Vincent Thomas) have been left by their widower father Eddie (nicely played by Jericho McWilliams), in the care of their maternal grandmother when he goes on the road as a steel salesman for the war effort.  Grandma Kurnitz the intimidating family matriarch (sternly and icily played by Sue Kelly) and her mentally-challenge daughter Bella (nervously and empathetically portrayed by Stephanie Gillham), will keep the family together in Yonkers, NY during the war year of 1942.

I mentioned earlier that Simon, on occasion, reveales a somewhat darker side.  In “Lost in Yonkers” he includes the character of Uncle Louie, the small time hoodlum son of Grandma Kurnitz (menacingly played by Tim Kelly).  To balance this darker tone, Simon creates the comic relief character of Aunt Gert (comically played by Judy Andreshak).  The core story, however, revolves around family relationships, love, and understanding, among other issues.  Although the play is billed as a dramedy, there are plenty of opportunities to enjoy the famous Simon trademark zingers, and situations.  He never strays far from comedy.  Rounding out the cast are Wendy Lane, Darren Sheffield, Tara Henkel, Stepanie Hart, Marissa Thomas, and the youngest member at 3 years-old, Charlotte Havely.

In the technical department, the choice of placing some of the narrative and action in the candy store by director and technical designer Havely is a nice touch that allows for additional atmosphere-players to become involved in the story.  Also, it adds detail and texture in recreating its 1940’s period setting (I’m afraid the neighborhood candy store, however, in 21st century America has gone the way of high button shoes and our innocence along with it).  Technical director Frances Wright, Director/Set Designer Havely, and Stage Manager John Wright, along with Mary Phelps, the assistant to Havely, can all take pride in helping to produce a memorable production.

Directors usually bring personal visions to productions.  Sometimes, their vision take the form of shifting the emphasis as to which of the characters the play is about.  In the case of Theatre 29’s show, I feel that Havely’s vision of placing more emphasis on the role of Aunt Bella, in essence, makes the play her story.  By doing that however, Havely alters the dramatic intention of the playwright which in turn changes the dynamic of the relationships – even if ever so slightly.  Every production I’ve seen of “Yonkers” (at least five) generally makes it Grandma Kurnitz’s play.  When it goes to Aunt Bella, the tendency to drift into melodrama and sentimentality takes over and the result is an unbalanced production.  If it stays with Grandma, then the family relationships work in concert with Neil Simon’s dramedy vision.  It may for some, work both ways.   However, for me, I prefer to cling to the version Simon wrote in 1991.

Having said all of the above, one cannot deny the passion and the talent of the actors who are working hard to make it a production audiences will remember.  In the final analysis, it’s always the audience that determines the success of a show.  And this show is definitely entertaining, enjoyable, and memorable.  For reservations and ticket information call the box office at 760-361-4151.