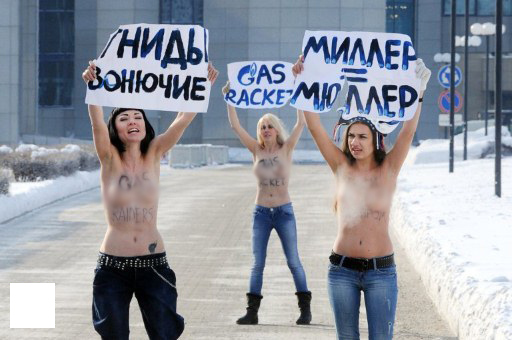 Ready to stand up and stand out for justice despite severe frosts, FEMEN activists have staged a new provocative stunt against the yoke of Russia’s gas giant.

Fearless and topless, the Ukrainian girls took off their clothes in front of the Gazprom building in Moscow, holding banners saying “Stop gas racket!” and “Snub Gazprom!”

One of the activists even managed to climb the roof of the Gazprom’s checkpoint, waving the Ukrainian flag before security guards brought her down. The girl was detained and is now in a local police office.

In this way, the girls voiced their protest against “Vladimir Putin’s gas moguls from Gazprom manipulating European countries that depend on Russia’s gas supplies.”

FEMEN official blog says that the activists are outraged by Russia’s “gas terror” against Ukraine coinciding with the coldest period of the year.