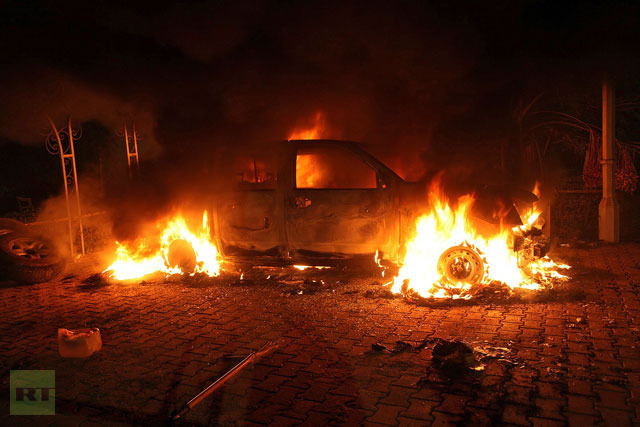 The US ambassador to Libya and three other Americans were killed when local militia assaulted Washington’s consulate in Benghazi. President Barack Obama has condemned the attack.

A group of extremist militia members stormed Benghazi’s US consulate on Tuesday night. Stevens may not have been killed in the Tuesday night assault, however, but rather when a second mob attacked his motorcade as it was leaving Benghazi Wednesday morning, the Guardian said.

Libyan officials alleged that Islamist militants fired rockets at Steven’s car, killing him and three other embassy staffers. Witnesses cited by local media claimed that members of the hardline Islamist group Ansar Al-Sharia were among the ranks of the attackers.

“Chris was a courageous and exemplary representative of the United States. Throughout the Libyan revolution, he selflessly served our country and the Libyan people at our mission in Benghazi,”Obama said in a statement.

“We apologise to the United States, the people and to the whole world for what happened,” interim Libyan president Mohammed Magarief said in a news conference. “We confirm that no one will escape from punishment and questioning.”