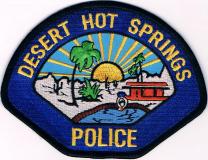 Officers from the Desert Hot Springs Police Department responded to an alarm call at the listed location. Upon arrival, officers discovered that an unknown suspect had forced entry into the location. They also discovered that several items had been taken during the crime.

Any information regarding this press release should be directed to Desert Hot Springs Police Detective Eddie Cole at 760.329.6411 x294.