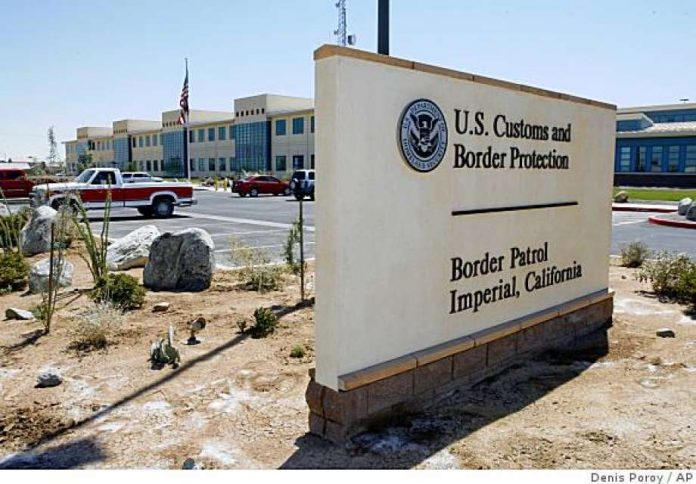 El Centro Sector is located in Southern California in the Imperial Valley. El Centro’s area of operation has diverse terrain – principally desert with some mountain ranges and wide areas of agricultural lands. The desert poses a danger for agents and potential border crossers as the summer heat can exceed 120 degrees. El Centro Sector has four Border Patrol stations. They are located in the cities of El Centro, Calexico, Indio, and Riverside. The El Centro Sector is responsible for 70 miles of international border.

El Centro Sector History
The first Border Patrol Station in the area was established at Indio, California in 1924. The entire force consisted of approximately twenty officers with one man in charge. They were referred to as Mounted Border Guards and were completely mobile, in order to cope with the enforcement problems, which consisted mainly of anti-smuggling operations. The officers were principally assigned to the Jacumba, Banning, Needles, Blythe, and Yuma areas. The locations were temporary and frequently changed. The principal smuggled aliens were Chinese, Hindu, and Mexican.

The El Centro Sector was first established July 1, 1924, and covered 410 square miles. In 1925, a permanent Station Headquarters was established located at Fourth and Main Streets, El Centro, California with other stations located in Westmorland and Niland. A Border Patrol Chief was assigned and was assisted by an Immigrant Inspector. The entire force consisted of 39 Patrol Inspectors with substations established in Jacumba, Westmorland, Niland, and Yuma.

In 1938, a five-acre block on North Imperial Avenue in El Centro, California was acquired from the County of Imperial and plans were made for the construction of a headquarters building at this new location. A Chief Patrol Inspector was in charge with an Assistant Chief Patrol Inspector, a newly created position, as his assistant. New stations were established at Indio, Banning, Needles, Blythe, and Yuma and Parker, Arizona. The authorized force was increased to sixty officers. In 1939, the Calexico station was established with a complement of six officers. In 1941, the Sector authorized force was increased to seventy officers and at that time construction was started on the new building. The building was completed at its present location in 1975.

During the 1940s, a heavy influx of illegal laborers began. All officers of the El Centro Station were engaged in traffic, train and ranch check operations. The Brawley Station was opened during this period to relieve the workload at El Centro. Brawley maintained two 24-hour traffic checkpoints on Highways 86 and 111, thus enabling the El Centro Station to concentrate more on train and ranch check operations. The traffic checkpoints operations were set up to keep illegal migrants from leaving the Imperial Valley and traveling up to northern areas. Additional officers from other sectors were detailed to El Centro to assist with the large influx of farm laborers entering illegally during peak harvest season.

From 1951 until 1954, additional officers were continually detailed to the El Centro area as the situation demanded. On June 9, 1954, it was announced that an operation would begin in a week to rid Southern California of illegal aliens. During the week following this announcement, 10,000 illegal aliens were apprehended at traffic checkpoints and railroad blocks, which had been set up to prevent the flight of illegal aliens to the north. Thousands of illegal immigrants departed to Mexico at no expense to the Government.

On June 17, 1954, “Operation Wetback” began, which included a special force of approximately 800 officers from all branches of the Service who assembled in Southern California. This force was organized into task forces, which in turn were divided into units of 12 men headed by supervisory officers. Each unit was organized and equipped to operate independently while maintaining contact with Sector Headquarters. Control of the border in this Sector was achieved within a few weeks.

At that time, an authorized force of 144 officers was established for the El Centro Border Patrol Sector. The officers who were detailed to the Imperial Valley area more than doubled the station’s strength. As circumstances improved, the detailed officers returned to their respective stations and El Centro continued in the same operation.

In 1955, a division of force was authorized at El Centro and two separate units were formed – El Centro Station and El Centro Sector Headquarters. Stations at Calexico, El Centro, Indio, Blythe, and Yuma remained operational. All other stations were closed. Yuma, Arizona was established as a separate sector and assumed responsibility for the Blythe and Yuma Stations.

The present Sector Headquarters complex was completed in May of 1976 and contains 10,335.9 square feet of space. A separate building contains 11,416 square feet of space and provides facilities for repair to the Service automotive fleet, the diesel bus fleet and also contains the Electronic Repair Shop. A third building provides covered parking space for 28 Service vehicles and houses the emergency generator. Part of the covered parking space was converted in 1989 to provide additional space for the Sector Electronics repair shop.

Additional property adjacent to the south side of the existing site of the El Centro Sector was acquired in 1985. It included an existing building that was remodeled and is used to house the Prosecutions/Screening, Asset Forfeiture, Automated Data Processing, Employer Sanctions and Anti-Smuggling Units. The El Centro Station consisting of twelve modular trailers was erected on this property in 1986.

A pistol range was built on Aten Road two miles north of El Centro. Patrol Inspectors constructed the original range in December 1940. Modernization of the range was authorized on October 9, 1964. To this date, the range includes a target storage room, a room for the Firearms Training System (F.A.T.S.), a 24 point covered firing line, and restrooms. A 10-foot cinder block perimeter wall, which encloses the entire range, was constructed in August 1990. A 4,000-sq. ft. metal building was erected in March 1989, adjacent to the existing pistol range. The building subsequently became the Sector training building.

Today, our job is controlling the 71 miles of border within the El Centro Sector. Indirect support of the National Strategy, the mission of El Centro Sector is working to protect the external boundaries of the United States and to prevent, detect, apprehend, and interdict terrorists, illegal aliens, smugglers, contraband, and violators of other laws. This mission is being accomplished utilizing a deterrence-based enforcement strategy that employs a sophisticated blend of tactics, and technology and a highly visible deployment of agents. While new technologies and traditions are being created, the fundamental values of the Border Patrol still ring true, “Honor First”.

Area of Responsibility
The El Centro Sector (ELC) is situated within the Imperial Valley of Southern California. ELC consists of four Border Patrol stations located at El Centro, Calexico, Indio, and Riverside. The El Centro Sector area of responsibility spans 71 linear miles along the International Boundary with Mexico from the Jacumba Mountains in the west to the Imperial Sand Dunes in the east. The Imperial Valley has three main cities, Calexico, El Centro, and Brawley. These incorporated areas and other small communities comprise less than one percent of the land.