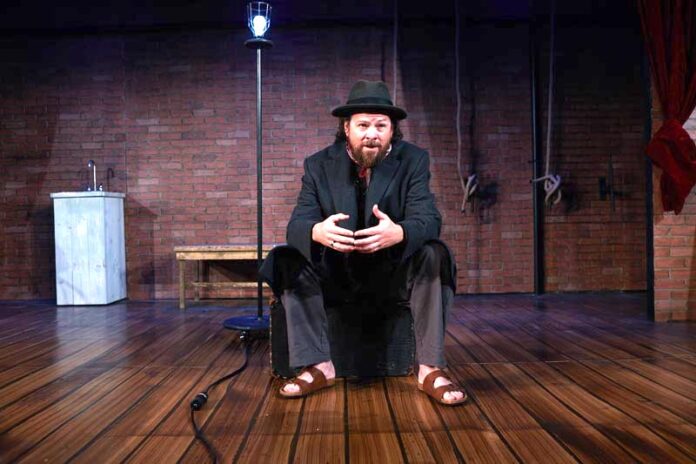 When theatre aficionados and scholars gather to think about the origins of the western art form we call ‘the theatre’, they often harken back to the ancient Greeks and their culture to see how far their creation has evolved over some twenty seven centuries.  Homer’s two major literary works or poems are “Iliad” and “Odyssey”, with “Iliad” being written first.  It may be skimpy when compared to Shakespeare’s canon but its impact none-the-less, has been enormous to the art form of storytelling over the centuries.

In 2020 the Covid-19 pandemic caused all entertainment venues to become more creative when it came to following CDC guidelines concerning the pandemic.  Traditional theatre audiences morphed into film format viewers.  Live theatre audiences became a No-No. The world of brick and mortar venues went silent, however, most live theatres still honor the theatrical tradition of keeping a ‘ghost-light’ burning through the night (tradition and superstition runs deep in show business).

Undaunted, North Coast Repertory Theatre (NCRT) began to mount productions on its theatre stage and then capture the story and the action on film, to be seen at a later time in a streaming movie format.  Challenging times for the actors, the technical staff and the absent audience you wonder?  You bet!  But creative artists like actors, directors and producers thrive in such situations.

His jaw-dropping solo performance keeps the viewer completely engaged and enthralled as he relives the nine year-old Trojan War saga without ever leaving the stage in its 93 minute production.  Baird, an accomplished actor-director in his own right, runs the gamut of emotions from rage to irony to light humor, to the horrors and folly of war; playing all the parts in Homer’s epic saga The Trojan War.

The story revolves around three classic Greek events: the kidnapping of Queen Helen of Sparta by Troy; the great battles between Grecian and feared warrior Achillies and Hector of Troy, the greatest warrior of the Trojan army in a test  as to which side will prevail in their attempts to rescue and return Helen to her husband in Sparta. Or will Hector of Troy win the siege therefore keeping Helen in Troy with Paris, the son of King Priam of Troy.

The chemistry between theatre and film director Ellenstein and actor Richard Baird is palpable as each compliments the gifts of the other; with the audience being the beneficiaries of their rich collaboration.  North Coast Rep’s bold, and enlightened, adaptation of Homer’s “Iliad” explores the nobility, savagery and the valor of the battles while insightfully revealing the human cost of war over the centuries.  I would even go so far as to offer “An Iliad” as the first anti-war movement story to confront the perfidy of those who profit from war.  And yet, we humans continue to ignore the efficacy and truth of history.  But, I digress.

Ellenstein’s “An Iliad”, despite the play’s gruesome references, is filled with modern language when it’s spoken by Baird in a sort of interlocutory-styled “asides” in their delivery.  His deep, modulated, baritone voice keeps the viewer fully enthralled.  His asides to the viewer are sly, amusing, and refreshing, in that they lend authenticity to the story and events that concerned Homer back in Eighth century BC Greece sadly, still plague world societies in the 21st century.

Ancient Greek culture was rife with God-like references, myths, and polytheism.  Statuary depicted some gods as half human and half animal even fish, or birds dominated their spiritual and societal lives where practically everyone prayed to multiple gods much like the Egyptians when it was an important request.  Times haven’t really changed all that much when it comes to asking for additional help with a problem, no matter the religion or the importance of the supplicant.  And the beat goes on …

Kudos to North Coast Repertory Theatre for selecting a relatively unknown play to produce for their audiences during the time of a worldwide pandemic, which for now, must be seen by audiences via collaboration with their sister art-forms of film and television.

In the technical department, NCRT Set Design wizard Marty Burnett celebrates his two hundredth design for the Solana Beach Equity theatre.   NCRT artisans who make this outstanding production a must see experience under the direction of David Ellenstein are: designer Marty Burnett with his spare but functional set, Aaron Rumley’s smooth cinematography and editing, along with camera assistant and editor Christopher Williams.

Cellist Amanda Schaar provides the musical accompaniment throughout the performance.  The choice of the cello is a nice touch. Cello’s deliver just the right amount of melancholy that serves as the spot-on leitmotif that pervades this excellent production.

For tickets on how to view “An Iliad”, go online to: www. northcoastrep.org.