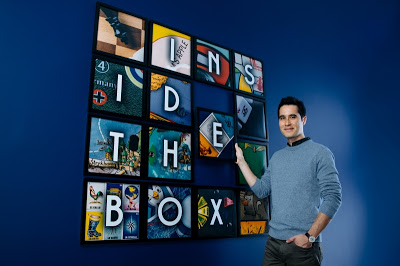 Apart from being known as one of the best regional theaters in the country, the Geffen Playhouse in Los Angeles was one of the first local venues to successfully attack live entertainment by COVID-19. The first production, the Frank Marshall-directed “The Present,” starring master prestidigitator and performer Helmer Guimaraes, allowed the show’s compact staging to easily transition to the Zoom platform. While it sounded risky, it actually brought audience members into even more intimacy with the star and the unique story of art, love, memory and card tricks.

The latest production from the Geffen, “Inside the Box,” is even better suited to the live stream format as its entire concept is based on boxes — grids, squares and puzzles. The world-premiere production from writer and performer David Kwong is described as an exhilarating glimpse into the world of games. Kwong is one of the crossword puzzle constructors at the New York Times, the gold standard for puzzle fans worldwide. With a combination of keen insight, sly wit and personal history, the affable Kwong displays his knowledge of the subject without ever sounding like a puzzle wonk…well, almost never.

Twenty-four guests all have a front-row seat in the evening’s entertainment and in the Zoom proscenium, resemble a slightly whack “Hollywood Squares” episode. When you purchase your ticket for the show, you receive a package a day or two before the performance with interactive props and instructions for your participation. In between solving puzzles, Kwong regales the crowd with stories of the most celebrated puzzle makers throughout history while letting his audience create their own moments of head-scratching joy.

Even if you aren’t a puzzle fan, this 85-minute long peek into the world of words and wordplay is vastly entertaining, and you actually get to share that “communal experience” that live theatre provides. Some participants eagerly raised their hands when they had solved a particular clue, while others never said a word but doggedly stayed the course, mostly due to the star’s pun-kish humor and charm. “Jeopardy” producers, are you listening? He’d make a perfect host someday, and I’m sure his mother would agree.

The show has proven so successful that it has been extended beyond the initial run; the show is sold out through January 3, 2021, but additional dates are being added. The Geffen is also offering five $25 Mobile Rush tickets at each performance on a first-come, first-served basis. More information on tickets can be found on the website at www.geffenplayhouse.org.

The Geffen has just announced its upcoming three-play “virtual season,” and I can hardly wait to join in the magic.