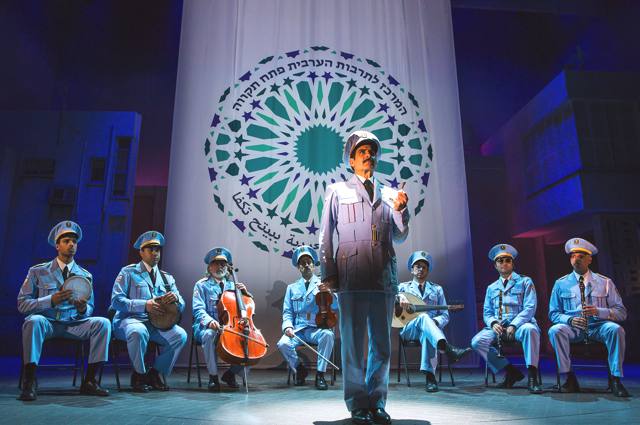 Word on the street regarding the new, intimate, insightful, and delightful musical production “The Band’s Visit”, indicates that this small and compelling musical set in Israel, may become a sleeper candidate for Best New Musical and Best Female Actor in a Musical, come Tony Award time on June 10, 2018.

Opening to rave critical reviews on November 9th, “The Band’s Visit” is not your father’s familiar book musical, like “Gypsy”, or “My Fair Lady”, or even the game-changing “Hamilton”. This small, wistful, musical gem, features a scaled-down, haunting musical score and lyrics by David Yazbek, which feature only thirteen songs. But those thirteen numbers plumb one’s soul when it comes to differences and diversity in the form of a seductive, Middle Eastern-set musical that complements the libretto written by Itamar Moses. The musical is based on the 2007 Israeli screenplay and movie of the same name.

As an attendee to the American Theatre Critics Association’s (ATCA) annual New York Conference, we had the rare opportunity to listen to and then ask questions of the musical’s creative team on the genesis and the chronicling of “The Band’s Visit” on its journey from creative spark, to rehearsals, to opening night on Broadway.

The creative team of composer/lyricist David Yazbek, librettist Itamar Moses, director David Cromer, and producer Orin Wolf, were candid in their replies during the give and take with the critics who tossed the team a lot of creative questions concerning choices made and choices discarded down the road. The moderator was ATCA member Martha Wade Sketekee. Listening to the panel wrestle with the myriad details that have to be addressed; like constant changes and tweaks to the story, the music, the lyrics, plus the set designs, costumes, et al, it’s easy to understand why many plays and musicals never get to see the lights of a Broadway stage.

Production problems, mainly dealing with budget issues along with theatres and cast availability are the main culprits. Most musicals require months of work and gestation before their Broadway opening. Last season’s blockbuster musical juggernaut “Dear Evan Hansen”, took eight years to arrive on Broadway. “The Band’s Visit” story is sparse but compelling. Eight Egyptian musicians led by Coronel Tewfiq – a winning Tony Shalhoub like you’ve never seen him before – comprise the Alexandria Ceremonial Police Band who arrive by mistake in a small town in Israel’s hot, dusty, Negev Desert. Their booking to perform was originally set for a different much larger city in Israel. It’s late at night. And there is no transportation out of the town or any hotels to stay at, so the Band settles at a cafe owned by Dina (a divorced, sensuous, Marlene Dietrich-like, Katrina Lenk) who offers them lodging for the night. Overcoming ethnic barriers, some of the Egyptian musicians find diversion and lodging with the local townspeople. The Band, however, is scheduled to depart for the correct city and their cultural-exchange performance tomorrow… but a lot can happen in just 24 hours.

The power and appeal of this splendid musical lies in its structure, the insightful narrative and its understated performances of the fourteen talented cast members and it’s four gifted band musicians who bring a fresh paradigm shift in the shaping of the musical genre thanks to the personal vision of its creatively inventive director David Cromer. Rodgers and Hammerstein broke the mold of musical structure in 1943 with “Oklahoma” to be followed seventy-two years later by Lin Manuel Miranda’s “Hamilton”, that introduced another paradigm shift with the game-changing ‘Rap and Hip-Hop’ as a format for future musicals.The touching performances of the cast are solid all around, with Shalhoub, shining as band leader Coronel Twefiq. It’s a poignant portrayal of a dignified man grieving the loss of his wife and young son while still trying to remain engaged in life and to those around him.

Lenk is a revelation as café owner Dina. She projects the weariness of an attractive, lonely woman, seeking a respite for just one night from the boredom of life in her small town. And, she sings her life disappointments in a throaty, seductive and sultry voice that draws one closer to the on-stage action. It’s a star-turn performance. Look for her name as a Tony Award nominee come 2018 – and perhaps a win for Best Female Actor in a New Musical.

A banal plot-line would have Shalhoub and Lenk end up as a one-night-stand and then move on. But Moses and Cromer, thankfully, had other ideas that worked better. The Egyptian band characters actually play their on-stage instruments, and boy do they play. Ari’el Stachel on trumpet, George Abund on violin, and Alok Tewari on clarinet, and band members Ossama Farouk, Sam Sadigursky, Harvey Valdes, and Garo Tellin, in their musical numbers stopped the show a couple of times with enthusiastic audience applause. The set designed by Scott Pask cleverly makes use of a turn-table that opens up the stage to focus on the characters in their various village settings. The lighting designed by Tyler Micoleau, and the costumes of Sarah Laux – especially the band’s powder blue, military uniforms and the contrasting, somewhat drab costumes, of the residents, are spot-on; again visually underscoring the differences of the cultures.

The haunting musical score of composer Tazbek is in the capable hands of the musical team of Andrea Grody, Jamshied Sharifi, and Dean Sharenow. The deliberately slow pacing by director Cromer nicely underscores the ennui of small-town life that is so essential to the show. One cannot escape, however, the comparison of characters grappling with the oppressing ennui in Chekov’s “Uncle Vanya”. Once, one gets on the wavelength of the performers, your enjoyment of this impressive musical will be enhanced.

“The Band’s Visit” performs at the Ethel Barrymore Theatre, in NYC, and runs as an open-ended show.