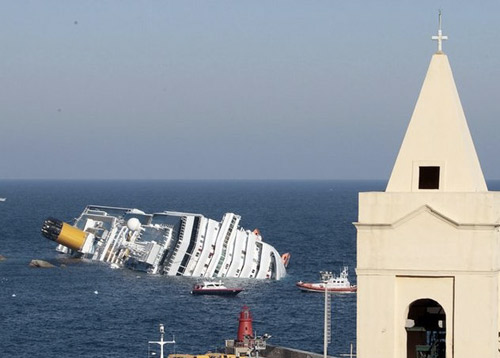 Rescuers have found two more bodies onboard the stricken Costa Concordia, bringing the death toll to five, while 17 more people remain missing. Earlier, a helicopter airlifted a survivor from the capsized hulk of the ship.

The Italian Coastguard says the divers involved in the rescue operation have discovered the bodies of two elderly people in the submerged restaurant of the luxury cruise ship.

An Italian crew member was rescued more than 36 hours after the accident. He has a serious leg injury. During the night rescuers discovered a South Korean honeymoon couple who had been trapped inside the ship for more than 24 hours.

The rescue operation is still under way, but the authorities have reduced the number of missing people from 40 to 17.

Earlier on Sunday the Russian Embassy in Italy announced that it had established contact with all 111 Russian tourists and crew members who were onboard the Costa Concordia at the time of the accident.
“Two missing citizens have been found. They are alright. They are at a hotel in the town of Savona near Genoa,” the embassy spokesman said.

The authorities have arrested the ship’s captain, Francesco Schettino, on charges of manslaughter, causing a shipwreck and abandoning ship while passengers were still onboard.

Witnesses say they saw him in one of the lifeboats covered by a blanket well before all the passengers had been evacuated from the stricken ship. But he insists he was the last to leave the ship.

Police are also investigating why the giant cruise liner strayed off course and ran aground not far from the small island of Giglio. The captain says that the ship was going along its route when it struck a reef which was not marked on the maps. It was only after the accident the liner changed its course.

On Friday the Costa Concordia cruise ship carrying some 4,200 people hit a reef off the Italian coast. Over 4,000 were evacuated from the liner, while rescuers began efforts to save 200 others trapped onboard.