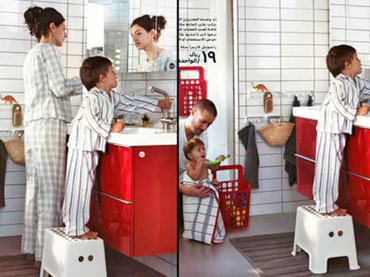 Previously, the catalogue of the world’s largest furniture retailer IKEA was identical all over the world. There was a noticeable difference in a recent Saudi Arabian version, however, which airbrushed all the women and most girls from its pages.

The pictures in the Saudi catalogue display the same interiors and products, but no women.

While international versions of the same catalogue featured four designers on the cover, there are only three in the Saudi edition – the female designer was airbrushed out of the picture.

One of the pictures showed a mother in front of a bathroom mirror alongside her family, but the Saudi edition removed the mother. In another picture, a barefoot woman with earrings was replaced by a man in black socks.

Sweden’s Minister of Trade Ewa Björling argued that the retouched images are a “sad example that shows that there is a long way to go in terms of equality between men and women in Saudi Arabia.”

“Women cannot be retouched away in reality. If Saudi Arabia does not allow women to appear [in public] or work, they lose about half their intellectual capital,” she told Swedish newspaper Metro.

Women’s in Saudi Arabia live under strict Islamic law, and are forbidden from behavior that is common in Western cultures. The Gulf kingdom is the only country in the world that prohibits women from driving. Women there are also not allowed to vote, and must also have permission from a man to work, travel or open a bank account.