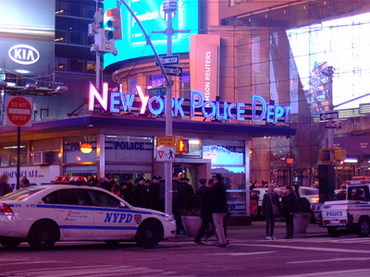 New York City’s war on freedom could be adding a new weapon to its arsenal, especially if NYPD Commissioner Ray Kelly has his say.

The head of the New York Police Department is working with the Pentagon to secure body scanners to be used throughout the Big Apple.

If Kelly gets his wish, the city will be receiving a whole slew of Terahertz Imagining Detection scanners, a high-tech radiation detector that measures the energy that is emitted from a persons’ body. As CBS News reports, “It measures the energy radiating from a body up to 16 feet away, and can detect anything blocking it, like a gun.”

What it can also do, however, is allow the NYPD to conduct illegal searches by means of scanning anyone walking the streets of New York. Any object on your person could be privy to the eyes of the detector, and any suspicious screens can prompt police officers to search someone on suspicion of having a gun, or anything else under their clothes.

According to Commissioner Kelly, the scanners would only be used in “reasonably suspicious circumstances,” but what constitutes “suspicious” in the eyes of the NYPD could greatly differ from what the 8 million residents of the five boroughs have in mind.

The American Civil Liberties Union has already questioned the NYPD over what they say is an unnecessary precaution that raises more issues than it solves.

“It’s worrisome. It implicates privacy, the right to walk down the street without being subjected to a virtual pat-down by the Police Department when you’re doing nothing wrong,” Donna Lieberman of the NYCLU says to CBS.

Read the whole article at RT.COM…