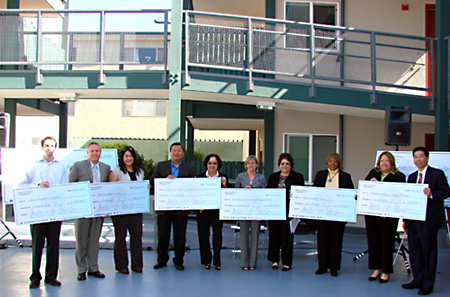 The $42.8 million in funding will go to the following 54 California communities:

“These awards will significantly impact the ability of small cities and counties to improve the lives of their citizens. We’re proud to help fund upgrades to housing, infrastructure, and

The funds were made available under the non-entitlement CDBG Federal Program. On January 9, 2012, The 2012 CDBG Notice of Funding Availability was released announcing approximately $34 million for the Program Year 2011-2012 and an additional 50% of the allocation for Program Year 2012-2013. The total funding amount for local assistance this cycle is approximately $51.6 million. Of this amount, approximately $42.8 million will be awarded now, and approximately $8.8 million will be held for Economic Development Over-the-Counter awards to be made throughout the course of the coming fiscal year. The OTC grants typically fund large economic development projects that result in the creation and/or retention of jobs. More than half of the OTC funding must target low income individuals.

HCD provides leadership, policies, and programs to preserve and expand safe and affordable housing opportunities and promote strong communities for all Californians. HCD also supports increasing the supply of housing, especially affordable housing, and works to improve the State’s housing conditions, as well as the health and safety of its residents. HCD is California’s lead housing department, and is part of the State’s Business, Transportation and Housing Agency.

A listing of awarded jurisdictions and the scope of their projects is on the following page.