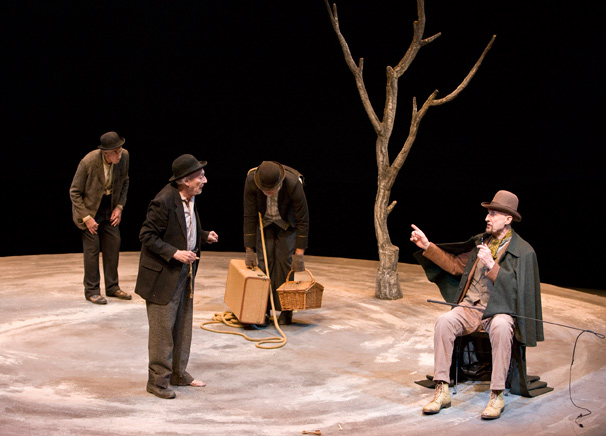 For millennia man has been asking “what is the meaning of life; why am I here;  where did I come from; and where am I headed?”   When Irish playwright Samuel Beckett debuted ­­­­­­­­­­Waiting For Godot in 1953, he posited similar questions into a story of two men waiting around for an appointment with a mysterious Mr. Godot, who, when he arrives will explain everything they are wondering about.  What will be explained?  How long must they wait?  In the words of Conan-Doyle’s Sherlock Holmes (another fictional character) “… Patience Watson, all will be revealed”.  However, in the intervening fifty-nine years not much as been revealed.  Lots of theories and speculations, but not much enlightenment – until now, that is.

“Waiting For Godot”, the revival production currently onstage at the Mark Taper Forum; insightfully directed by Michael Arabian, is a gem of a production, and the progenitor of the school of theatre audiences have come to know as the “theatre of the absurd”.  It stars two of the world’s acknowledged Beckett scholars and performers in the twin lead roles.  84 years-young Alan Mandell as Estrogon, also known as Gogo, is one of the few living actors to have maintained a working relationship with Beckett until his death.  The wonderful Irish actor Barry McGovern, formerly of the famed Abbey Theatre of Dublin, has played the role of Vladimir, also known as Didi, more times than any living actor.  Together, these two legends bring such understanding, clarity and believability to their performances that, for me at least, the enigma that was “Waiting For Godot” over the years, is dispelled forever.

Both characters claim that Godot is an acquaintance but in fact they hardly know him, admitting that they would not recognize him were they to see him.  To occupy their time they eat, they sleep, converse, argue, sing, play games, swap hats, and even contemplate suicide – anything “to hold the terrible silence at bay”.   Program notes make mention of the play’s positive reception when its been performed before inmates in prisons around the world.  The waiting part, the central theme of the play, really resonates with those denied freedom.  In the play Didi and Gogo are only “trapped”, because they cling to the concept that freedom is possible.  Freedom, according to Beckett, is a state of mind and so is imprisonment.

Beckett over the years has steadfastly maintained that his play is not religious in either allegory or in its tone.  However, critics, actors, and audiences alike are not so sure.  Numerous books and essays have been written about the play’s subject matter, all in an effort to explain what Beckett refused to discuss – the real meaning of “Waiting For Godot”.  Nonetheless, the play has a definite appeal and new audiences of young people are rediscovering the mystery and the depth of Beckett’s masterpiece.

Providing solid support in the Taper’s revival are James Cromwell (of movie fame) as the dictatorial aristocrat Pozzo, Hugo Armstrong as Lucky, the slave/servant of Pozzo, and LJ Benet as a messenger from Godot.

Cromwells’ Pozzo, when viewed through the lens of 21st century America, appears to resonate with the audience as the embodiment of the 1% in the 1% vs. the 99% movement.  Hugo Armstrong brings a hidden strength to his portrayal of Lucky, (although most wouldn’t think he was so lucky), as the slave/servant of the cruel and unfeeling Pozzo.  A young fifteen year-old LJ Benet portrays a youthful messenger/acolyte of Godot’s who keeps Gogo and Didi on tenterhooks by relaying Godot’s messages as to when he will see them.  Although there are two starring roles and three solid supporting roles, the entire production puts forth a strong ensemble effort, which makes for a truly transcendent production capped by a clarity rarely found in “Godot” productions.

In the technical and creative team department, John Iacovelli’s spare, save for a lone leaf-denuded-tree set design, not only matches but enhances the loneliness of the characters’s plight.  Helping set and maintain the mood throughout the production, are the light and projection designs by Brian Cale, along with costume designs by Christopher Acebo that also mirror’s the timeliness of the story.

“Waiting For Godot” runs through April 22nd.  For reservations and ticket information call the Box Office at 213-628-2772 or go online to www.centertheatregroup.org.