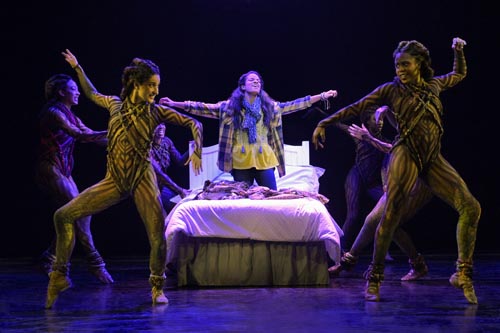 The La Jolla Playhouse (LJP) has a terrific track record when it comes to producing plays that have binary production values.  By that I mean their first priority is always to the loyal subscription-based audiences.

However, the by-product or bonus in their play season’s selections and productions under the aegis of savvy artistic director Christopher Ashley, always provides a road map toward New York and Broadway when warranted. Their trophy case attests to their many awards for excellence.

Many of Mr. Ashley’s directing productions include: “Memphis”, a red hot musical that successfully made the leap from La Jolla to Broadway running for three years nabbing two Tony wins for Best Musical, and for Outstanding Director of a Musical, in the process.

In 2017, the heart-warming, inspirational “ 9/11” infused musical “Come From Away”, transferred its smash-hit La Jolla Playhouse production to Broadway; once again winning Tony Awards for Best Musical, with Mr. Ashley winning another Tony as Best Director.

There’s no doubt about it. Tony Awards are no strangers to the 73 year-old acclaimed La Jolla, California-based theatrical company founded in 1947 by Hollywood actor/stars Mel Ferrer, Dorothy McGuire, and Gregory Peck.

Which brings us to the latest La Jolla Playhouse production “Fly”, a new, visually stunning musical reimagining of J.M. Barrie’s “Peter and Wendy”, the popular and enduring children’s fantasy story about  adventures in a dream filled place called ‘Neverland’ where children never grow up into adulthood where each has the ability to fly (with caveats, however, that must be observed).

All children have a secret desire to be able to fly, as do some adults (at least in our dreams).  In “Fly” it’s strictly a kid’s world forever… well, maybe not forever.  Remember, as Dorothy says in the Wizard of Oz “there’s no place like home Toto.”

I’ve seen at least four or so previous iterations of the “Peter Pan, Wendy, and Captain Hook” story over the years; beginning with the 1954 Mary Martin version through to this 2020 La Jolla Playhouse winning interpretation.   Comparisons are odious at best, however, every revival or reimagining brings a unique vision of the story to its audience.  Director Jeffrey Seller of “Fly”, stages his production as one that appeals to both children and adults by infusing his tale with a twist and an underlying celebration of the global feminist-movement.

Wendy becomes the protagonist while Peter is downgraded to a co-protagonist status with Hook remaining the antagonist. Hook now sports ‘mummy’s boy’ vs. complex societal issues.  Whether these changes alters the dramatic intention of Barries’ original story version remains to be seen. But hope springs eternal for the purists.

Although it’s a 21st century produced production, there’s nary a line of “questionable dialogue” to be heard. Rare these days from the pens of some playwrights and directors who are determined to break theatre decorum barriers in the name of ‘honesty and the reality in life’.  That being said, I don’t need to experience the reality of a ‘character’ suffering from diarrhea to actually display that action on stage or any other similar character traits in the name of ‘reality’ or ‘truth’; thank you very much.

When inevitable societal changes come, as they must, to audiences of all of the art forms, resistance on the part of the “purists” can be fierce. I’m sure there are some today who would prefer to see Shakespeare performed in an Arden-like forest setting as it was 500 hundred years ago.  They forget, however, that all of the roles then were performed by men.  It was English law in the era of the Divine Right of Kings. Thankfully those laws are no longer practiced or viable.  But we live in uncertain and perilous times. So stay tuned.

Today our diversity and gender-bending productions are still not fully embraced.  But they’re catching on especially, with much younger audiences. Diversity and gender-bending casting blessed us with Diane Venora performing as ‘Hamlet’ and most recently, the great English actor Dame Glenda Jackson at the tender age of 82, tackling ‘King Lear’.  Lear is arguably the most physically demanding of all of Shakespeare’s plays.  After all, the character of Lear is ‘crazy’ for most of the play.  Today’s medical analysis would probably say he is suffering from some form of dementia or Alzheimer’s disease.  It takes incredible stamina to perform the role over two and a half hours on stage night after night.

When “King Kong, the musical” debuted on Broadway in November 2018, I made a pact to review it with my Massachusetts-based theatre critic colleague Charles Giuliano, founder and editor of Berkshire Fine Arts website of which I am a contributing critic.

I was intrigued about how the producers of ‘King Kong’ were going to stage this legendary behemoth of the jungle.  The on-stage ‘Kong’ was a 2000 pound, 20 foot tall character/puppet that required a crew of seven to bring him to life every night.  The technical obstacles of the production were staggering, nonetheless, ‘Kong’ ran for nine months and it was jaw dropping in its execution.

My thought was to review the production from a ‘technical’ point of view on how the technical aspects enhanced the overall theatrical experience. Charles Giuliano’s thrust would cover the production from the performance assessment of the story adapationt, singers, dancers and actors.  We wrote two separate reviews that appeared in our separate publications.  Mine being the Desert Star Weekly in Palm Spring California as well as on desertlocalnews.com website. Mr. Giuliano’s appeared on Berkshire Fine Arts website, in Massachusetts.  Our collaborative efforts 3000 miles apart worked beautifully.

The La Jolla Playhouse “Fly” production is also a marvel of how creative, skilled technicians can enhance the overall quality and enjoyment of a production by gifted artists. Theatre is a collaborative art form as we all know.  A successful endeavor be it a movie, TV series, a ballet, musicians in the symphony orchestra, or an  opera, in any of the accepted performing arts disciplines knows it “takes a village” to successfully pull it off. The painter and/or novelist and other solitary art form practitioners know they will need the services of that ‘village’ to pull it off later on.

“Fly” is a sensationally performed musical that encompasses all of the components necessary to transfer the show to Broadway; probably they were looking at an October 2020 or February 2021 opening.  The creative team boasts enough Tony-winning and Tony nominated artists with the energy and horse-power to field a Major League Baseball team. So another La Jolla Playhouse production had its creators packing their bags for Broadway following the LHP run and, then the coronavirus pandemic engulfed the entire globe.

As traditions and Budget considerations drive decisions when it comes to Broadway, there will always be creative changes to the incoming Broadway production.  Frankly, as colorful and satisfying as this production is, it’s somewhat over produced. There are a lot of visual pyrotechnics taking place that compete with the lyrics and the propulsive musical numbers and forward movement of the basic story; which can lead to disengagement on the part of an audience.  It’s also a tad too long.  Typical running time for Broadway musicals is about two hours; fifteen minutes.

These are fixable issues that director Seller and his creative team of: Librettist Rajiv Joseph, Composer Bill Sherman and Lyrists Kristen Childs and Rajiv Joseph will, no doubt, judiciously solve before opening night; whenever that takes place. Right now all theatre productions have been cancelled in California and New York, with more cities and states following suit weekly.

The Peter Pan-Wendy-Tinker Bell-Captain Hook story has been a children’s favorite since its debut more  115 years ago.  Multiple Tony-winning Director Jeffrey Seller is blessed with a cast of some twenty-five plus artists who dance, sing, and perform Andy Blankenbuehler and Stephanie Klemons’ flat-out sensational choreography to the hilt.

Principle performers like fetching Storm Lever as Wendy; an assured Lincoln Clauss as Peter Pan, have wonderful on-stage chemistry in their always in-the-moment performances whether ‘flying’ some twenty-five feet above the stage along with Isabelle McCalla as Tinker Bell, or fleeing from Eric Anderson as Captain Hook, and Nehal Joshi as his somewhat bumbling second-in-command Smee, plus a very boastful, but inept gang of pirates, make for many laughs and insights.

Director Seller also has his principles performing light-comedy turns instead of the nuanced darker sides of playwright Barries’ story that previous productions have mounted.  Liisi La Fontaine, in a strong performance as Crocodile, sports a creative, shimmering dress designed by Tony Award winning designer Paul Tazewell, who does the same costume magic for the ensemble dancers and the pirates.  Tony Award winner Howell Binkley’s lighting design allows to us appreciate the amazing aerial designs and choreography of Pichon Baldini, whose balletic-like moves for Wendy, Peter, Tinker Bell, seem natural in their execution of “flying”.  The Music supervision, arrangements and orchestrations are by Will Van Dyke.  The Scenic design is by Anna Louizos, with Sound Designs by Nevin Steinberg.

It’s a pity that all of this wonderful work and performances won’t be seen as scheduled. However, the health and safety of everyone, both audience and company of performers trumps any entertainment event until this COVID-19 pandemic nightmare memory for some, is declared over. If and when this impressive musical feast for the eyes and ears returns once again to perform at the La Jolla Playhouse, I urge you to attend.  For me this production is one of the most entertaining Wendy/Peter Pan/ Captain Hook productions I’ve seen in a long, long, time.

All photos are by Kevin Berne.