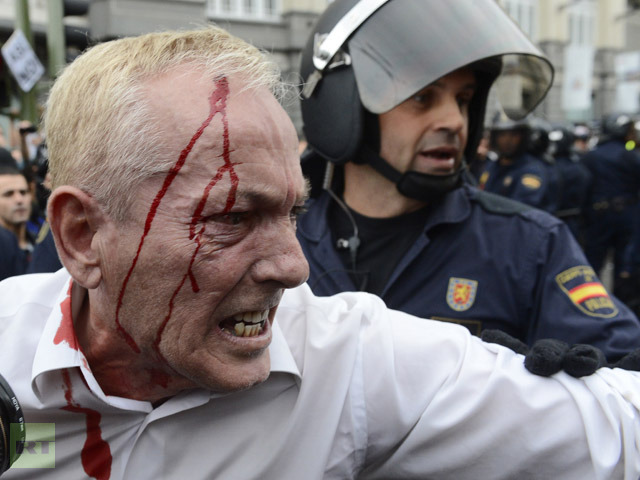 Madrid riot police have cleared Plaza de Neptune of protesters, with about 200 officers securing the surrounding blocks. At least 60 people have been injured and 26 arrested as police used batons and rubber bullets to disperse the crowd.

Local emergency services have confirmed that at least 60 people, including eight policemen, were injured in clashes between police and protesters, El Pais reports. One of the wounded is believed to be in critical condition, while one of the injured policemen suffered a severe concussion.

Riot police dispersed the protesters, dragging some who had tried to get through police lines by their arms and legs. An uneasy order was restored and reinforcements were brought in to try and disperse the crowd.

Thirteen of those arrested have been detained after a group of protesters tried to break through the police barrier for the first time. Further arrests were carried out during the following clashes, bringing the total number of arrests to some 60, El Pais reported.

Authorities estimate that about 6,000 people took part in Tuesday’s protest. Over 1,300 riot police officers were deployed in the capital, which is more than a half the country’s riot police force.

Victor Sampedro, associate professor at the Rey Juan Carlos University, told RT that heavy handed policing was largely to blame for the outbreak of violence: “What really went wrong was the way and the behavior of the government and how they conducted the situation. People gathered in those squares and when they tried to surround the parliament, they were blocked, there were there different rings and there was an overwhelming presence of police,” he said.