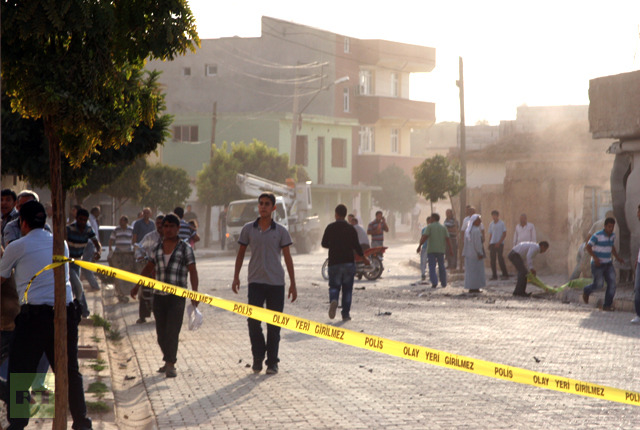 Turkey has fired back at Syria after Syrian mortar bombs killed five people and wounded eight, in a Turkish town near the border, according to senior Turkish officials. NATO convened for an urgent meeting tonight, unilaterally condemning the act.

“Our armed forces in the border region immediately retaliated against this heinous attack… by shelling the targets spotted by radar,” Prime Minister Tayyip Erdogan’s office said in a statement.

“Turkey will never leave unanswered such kinds of provocation by the Syrian regime against our national security,” the office added. According to Syrian media, Turkish artillery hit targets in the province of Idlib.

Syria offered condolences to the Turkish people, saying it is investigating the incident, Reuters reports. Damascus also said it respects the sovereignty of neighboring countries and urged “states and governments” to act wisely and rationally.

Turkey is now deploying tanks, artillery and missile batteries to the Syrian border, reports Mahir Zeynalov, a journalist with the prominent Turkish newspaper, Today’s Zaman.  Zeynalov was citing sources on the ground, who also allege that Turkey continues to heavily shell Syria. Another source told him that Syria fired back, hitting unoccupied land.

NATO’s North Atlantic Council has convened tonight to discuss the shelling of the Turkish town. The meeting has been held under article 4 of NATO code, concerning consultations when a member state feels territorial integrity is under threat, officials say.

US Secretary of State Hillary Clinton has condemned the act, saying  “we are outraged that the Syrians have been shooting across the border.“